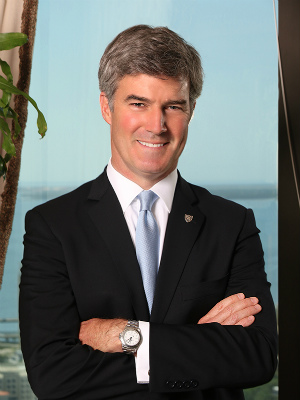 LeRoy Collins III serves as the Vice President of Cybersecurity for CEA Group, a Tampa-based boutique investment banking firm, where his primary focus is originating deal opportunities and building strategic partnerships within the cybersecurity, intelligence, government and military communities.

Previously, Collins worked for the City of Tampa's Economic and Urban Development Department, where he was the City Liaison to MacDill Air Force Base, responsible for renewing and expanding Tampa's Enterprise Zone with newly established Community Redevelopment Areas. He was individually responsible for securing more than $1.3 million in state grants.

His start‐up experience was with Z‐Tel Communications, where he served as the territory manager and director of military sales of personal telecommunications services, generating $3.1 million in annual revenue in a seven‐state territory. Z-Tel went public on the NASDAQ stock exchange.

Collins also served on active duty as an Airborne Ranger, where he executed tactical operations and training as a paratrooper of the 2nd Battalion, 75th Ranger Regiment in Ft. Lewis, Washington under U.S. Special Operations Command (SOCOM), before receiving an honorable discharge.

Mr. Collins received a BA degree in Government and Foreign Affairs from the University of Virginia.