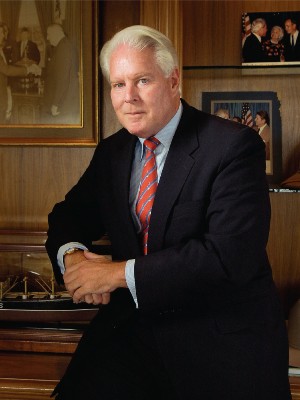 Mr. Wright is a 6th generation Floridian whose ancestors pioneered trade between, Scotland, Spain, Cuba and the United States from the 1850’s onwards. He is one of the great-great grandsons of Dr. H.T. Lykes, who, with Captain James McKay established the trade of cattle and general cargo from Tampa to Havana. This trade flourished and led to the formation of the Lykes Bros (lykes.com), a steamship company, which expanded to all of the other U.S. Gulf ports and around the world.  Mr. Wright joined Jardine, Matheson & Company of Hong Kong and China in 1972 and is credited with re-opening shipping for Lykes Lines and trade between the U.S. and the People’s Republic of China. In 1981 he returned to the U. S. to join Lykes Bros. Inc. of Tampa as Vice President for Corporate Planning. He also became Chairman of the Northeast Bank of Clearwater at the time, one of several banks that became the then First Florida Bank Group, and now Bank of America.

Today in Saudi Arabia, Parke Wright is Managing Director of the Royal Palm Group, which is an investment company engaged in joint ventures in the industrial and agricultural sectors. The Royal Palm Group is also partnered with Fahad Abunayyan Group (fahad-abunayyan.com) also active in business development in the construction, oil & gas and water drilling, marketing and new business development. Mr. Wright is a partner with Darktrace (darktrace.com), a world-leading Cybersecurity company. His team efforts with Darktrace are focused on the United States, United Kingdom, and the Kingdom of Saudi Arabia.

Mr. Wright is a graduate of the University of Florida and the University of South Florida, with a degree in Philosophy and Chinese Studies. Mr. Wright works on several philanthropic efforts to build economic prosperity, conservation and world peace. Mr. Wright is a member of Leadership Tampa Alumni of the Tampa Bay Chamber of Commerce, and supports the Parke Wright III Leadership Award, plus scholarship awards for MacDill Air Force Base participation in Leadership Tampa each year.